Back to the Future

For the last six months I’ve been working on the third of the Vampire Testaments, PAST LIFE, which is set in 2028, twenty years in the future. In developing the world in which it takes place, I had to conjecture about what the world would be like in twenty years. I wasn’t writing a science fiction novel, per say, as the story continues my vampiric odyssey, rather than the future world, but I need to make my future world plausible.

I decided that I wasn’t trying to see into the future as much as decide what I wanted it to be like, then justify and explain the path that got us there. I looked back twenty years at the world of the nineties, and turned my gaze forward to consider what changes I wanted to make in the world. Most of what I saw had to do more with social changes and political and economic shifts, but I also found myself pushing what I see around me to the next level.

Half the fun in futuristic fiction is playing with the toys, coming up with devices, vehicles, appliances, and all the tech and biological advances that will change our lives. Half the fun of these prognostications is looking back at them from the realm of the imagined future, and seeing how close they were to where we are.

As I was working out my own futureworld, Rose Fox, an editor friend and running buddy from the KGB Fantastic Fiction and NYRSF readings, gave me a galley of a book she’d worked on to read. A compilation of pieces from Popular Mechanics over the course of the 20th century, it’s filled with “The Wonderful Future that Never Was” as the title suggests. 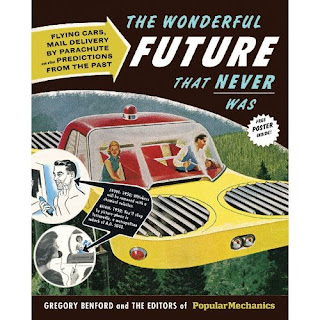 It’s filled with articles and the maddeningly tantalizing color illustrations that accompanied them, visions of all the things we always wanted and still haven’t quite gotten. The much-desired flying car makes an appearance here, as do rocket packs and the domestic promise of clothes made of paper, plastic, asbestos, and homes that clean themselves or can be hosed down. There are some that we managed to get, like moving sidewalks (at least in airports), electronic devices to filter dust from the air, superfast computers...you have to see some of it to believe it.

Forget buying a copy before Christmas -- Amazon is already sold out and waiting for more -- but don’t give up. It’s like a colorful box of bon bons to leave lying about for friends to nibble at a piece at a time. More than anything, it illustrates the endless fascination o the human mind with what lies ahead, and the boundless imagination we devote to it. Seeing what worked, what didn’t, and understanding why from the real point of view of that imagined future is an education in how to imagine the future.

If this book teaches us anything it’s that the future is never what we expect it to be. It’s never as flashy, but it’s always surprising. In the case of the computer revolution and the rise of data transmission as a major commodity and resource, the greatest change is proving to be where it always is -- in ourselves. The world and our future change to reflect what we want from them, and as I build my own dark future for my novel, I’m enjoying and learning from the lessons of past future predictors, both their failures and successes.

I was thinking of this a bit when we were watching the original trek tonight. The idea of the future then was so wrong.

Copies are available at indies and other retailers--I think it's just Amazon that's out.

Interplanetary travel? Settlements on the moon? Teleportation? And what about, yanno, peace on earth? Wasn't the invention of nuclear weapons supposed to end all wars?

Back to the Future

I was thinking of this a bit when we were watching the original trek tonight. The idea of the future then was so wrong.

Copies are available at indies and other retailers--I think it's just Amazon that's out.

Interplanetary travel? Settlements on the moon? Teleportation? And what about, yanno, peace on earth? Wasn't the invention of nuclear weapons supposed to end all wars?