We  live on a large piece of land, so it is ideal for a dog.  On the other hand, we travel a lot, by airplane, which does not make a dog an idea pet.


So, when we exited our property and saw a small dog sitting beside our gate, we did not stop to pick it up.  And while there are no houses close to our gate, still, it could be someone else's dog - without a collar.


However, when we came home at the end of the day, a light mist was falling and there, sitting right beside our gate was the same small, white dog. I had to stop and my wife had to pick the wet dog up and we took it to our home.


She was what we used to call a Heinz dog, 57 varieties.  And while I said she was a 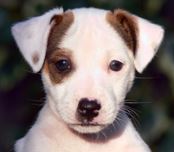 small dog, she was really a puppy and one with large feet, signaling that she would probably grow into a large dog. Naturally, since she was obviously abandoned and had no family, she was named Orphan Annie.


But as she grew, we discovered she had a sweet tooth. If there were flowers growing in the yard, she would nip off the blossoms.  As we walked through the trees, should I point to a flower, Annie would race over and devour it.  We finally got in the habit of directing the other to look at a flower, but no pointing.


Annie was not a good traveler in our small paddle boat. So, we would set out to paddle around the lake. Annie would jump into the lake and swim along beside or behind us. Even in the water, if she found a water lily, she would feast on it.


We  had a man who worked for us, helping to keep the place park-like. Trees have a habit of dropping limbs, or dying. So Joe would clean up all the limbs, saw up and dispose of any tree carcasses, mow the grass and tend to those flowers that Annie did not take care of first. He loved Annie, spending much of his time playing with the dog. Joe claimed he had never seen a dog who could run as fast.


Somewhat  later, when we were ready for another long trip, Joe said he would love to take Annie to live with him.  We agreed and when we returned, Joe asked if he could just keep Annie. Joe's wife had died and he really needed a dog to keep him company. We thought Joe would be good to Annie, and he was. We stayed in touch with Annie, taking her to the vet a couple of times each year.


So Orphan Annie really became just Annie as she and Joe hit it off and formed a neat, small family.
Posted by James R. Callan at 10:18:00 PM