I'm excited!! I was nominated by my fellow Novel Spaces author, Carol Mitchell, to Blog Hop reading my current work (in this case recent work) - and so here I am, ready to hop, write and roll!!! Thanks, Carol!!

1.   What is the name of the character?
The main character is Mahogany Cooper. She's been with her husband, Julian Cooper, a prominent sportscaster, for ten years, and married for seven. On the first Sunday of the New Year, Julian tells her he's leaving for his side chick, a female friend from college named Golden Thomas, and he's moving out. That is when the drama begins - the first word, sentence, page, chapter.

3.    What should we know about him/her/them.
Mahogany Cooper is the youngest of two girls, born in Atlanta, GA to a white father and a black mother. Their father died in a car accident, and Mahogany has anger issues with her mother, Aretha, because her mom did not allow them to attend the funeral. Unlike her mother who now only dates married men, Mahogany is determined to be a wife, and have a happy home. Being the side chick, like her mother, is a situation she will never accept, nor understand.

4.    What is the main conflict? What messes up his/her life?
The main conflict for Mahogany is that her husband Julian wants a divorce. Mahogany feels as though their marriage was just fine, and is trying to accept his decision and figure out what went wrong, and also understand how Golden could have stabbed her in the back, when she had been so nice to Golden through the years. After Julian moves out. Mahogany struggles to keep it together, missing work, feeling depressed, drinking, and feeling as though she won't make it without him. At times she's sad and at times she's angry. Her sister, Garcelle, and her best friend, Desiree, try to encourage her to get it together and move on, but in spite of what they say, she prays to God to save her marriage.

5.    What is the personal goal of the character?
The personal goal for Mahogany is to get her husband back and keep her family together so that their 3-year old daughter can grow up with her mother and father in the same home. She believes that getting him back will take her out of her misery. But, there is someone from her past who appears, who could be just the distraction she needs. And, there's something else . . . 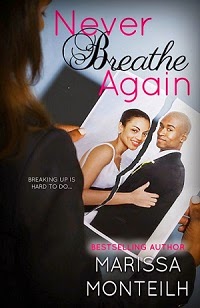 For the next Blog Hop I nominate Velda Brotehrton to take up the challenge - hey Velda!!!
Posted by Marissa Monteilh at 12:00:00 AM

This definitely sounds interesting. Would you categorize it as romance or woman's fiction?

Great title, and that premise never gets old. Congratulations on the new release, Marissa!

I love the title as well!

This definitely sounds interesting. Would you categorize it as romance or woman's fiction?

Great title, and that premise never gets old. Congratulations on the new release, Marissa!

I love the title as well!