When Your Characters Keep Talking 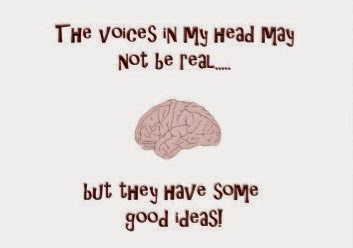 Years ago I was watching Oprah and an author said that he hears the voices of his characters in his head. I was like, wooooo, really? Yikes!

Well he was right. I type what I see and hear, dialogue first (I use very little narration), like I'm translating what I'm watching in a video. I live through this each and every time I write a story. I guess it's better than having writer's block, but my-oh-my, I'm going through it right now and during the times I'm not actually sitting down to write, it means I, as most writers, get very little sleep because these folks we've created are in our heads 24/7.

I'm in the 11th hour of a WIP that I need to send to two editors soon. I'm on my third and final draft, which is great, though things are still changing because of these dang "voices," or let's say "ideas," that keep popping into my head. I'm making notes, texting myself, scribbling on the back of envelopes, receipts, using my cell memo feature, recording myself, emailing myself, and sometimes, as always, thinking I'll take a chance that I'll remember the idea, but I don't. Good grief, I can't wait until the ideas stop, and then I'll know I'm done.


Just this morning the 3 year-old girl in my story said, okay, I had an idea, that she must pray, on her knees each night, asking God for her dad to come home. Then while I was making coffee, I decided to scratch one minor character, and assign his contributions to the necessary progression of the story to another character. Yesterday, I remembered that a phone rang at 1 a.m. in one scene, but I never followed up as to who it was. One character reminded me the other day to mention her occupation, which is critical to her having knowledge on a subject. Last week I wondered if my character should mediate. She wants to, and I think she could, but would I be true to her arc if she did? Oh, at three in the morning a character told me she should be at the gym in the short scene I'm writing today. Whew! This stage is amazing, necessary, a blessing, but dang characters, shut up already, or should I say, keep talking!

This is one reason why I always say don't rush a story because if you cut it off at the end before the "ideas" cease, you just might miss an opportunity to throw in a great angle. When I was writing Hot Boyz, right before I hit the button to email it to my editor, I realized that though we think there was a murder suicide, the shooter really survived, and he's in prison. The scene I wrote of the boyfriend driving out to visit the shooter is one of the best scenes, and best twists, I've ever written. I know, I gave it away, but hey - point made. :)


And so, I should be okay to turn this manuscript over to awaiting hands by Sunday night, maybe not. And even when I get it back, more changes, and one more proofreader. And trust, no matter what I say, I will be messing with the dang thing even while they have it. But in the end, after years of writing, in spite of times like this that work my nerves, I will know that I allowed my characters to live out their stories, not mine, and that I was true to them, in spite of them bugging me for all these months. It's a love-hate, but 51% love, and as long as that continues, I'll keep writing, with characters all up in my head, chatting away! My passion personified!

How do you handle this stage of writing - the times when you at least know you've developed them enough for them to speak, but you want them to shut the heck up so you can get some flipping sleep?

That's one thing that makes it hard for me to finish stuff. I know if I wait a bit I'll have more cool ideas and twists. I have published stories and then later realize more perfect twists. I published some of those versions myself on Kindle.

I never do that. As a matter of fact, I often wonder how some authors manage to turn out stories every couple of months. My characters don't let me do that. Even when I'm done they keep calling me back with those "ideas".

When Your Characters Keep Talking

That's one thing that makes it hard for me to finish stuff. I know if I wait a bit I'll have more cool ideas and twists. I have published stories and then later realize more perfect twists. I published some of those versions myself on Kindle.

I never do that. As a matter of fact, I often wonder how some authors manage to turn out stories every couple of months. My characters don't let me do that. Even when I'm done they keep calling me back with those "ideas".