Novel Spaces is in its 10th year! Over the coming months we'll be featuring some of the most popular posts from our archives. This one was first published September 18, 2009 by one of our first guests who went on to become a longstanding member of our blog group. Enjoy! 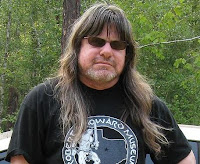 Charles Gramlich grew up on a farm in Arkansas but moved to the New Orleans area in 1986 to teach psychology at a local University. He’s since sold four novels and numerous short stories, mostly in the genres of Horror and Fantasy. In 2009 Charles’s nonfiction book, Write With Fire, was published. It’s a collection of his articles and essays on the craft of writing. He also produces a regular column on writing for the onlinenewsletter, The Illuminata. All of his books are available at Amazon, Barnes & Noble, and other online sites. Charles lives with his wife in Abita Springs, Louisiana, and has an adult son named Joshua. He blogs at Razored Zen.

Thanks to Novel Spaces for inviting me today. I’ve been enjoying the posts, and getting to look at the variety of featured books. Many talented authors live and visit here. I feel at home.

So, let me tell you about GEMS, which stands for GOAL, EFFORT, MOTIVATION, SKILL. I’m a mild mannered professor by day, and usually by night. And I’m always looking to help my students think about their education. As a writer too, everything ends up adapted for my own struggles with story, as well. That’s how GEMS developed, and here’s how I apply it to writing.

Most writers start with one GOAL, to get published. I did. But after you’ve seen your name in print that first goal is superseded and new goals must be set. It wasn’t until recently, however, that I realized the need to interweave my goals to produce the greatest effect. Specifically, I needed to set both long-term and short-term goals, and had to understand the difference between primary and secondary goals.

A primary goal is the highest level and I believe a writer should have only one. Everything else will be secondary, although that doesn’t mean unimportant. These days, my primary goal is to “advance my writing career.” Any other goals I set should work toward that purpose. Some “secondary” goals will be short-term: setting up a signing, improving a website, or even reading a book on writing. Other secondary goals are long-term. Eventually, I want to write a more ambitious book than I have so far, one appealing to a wider audience.

GOALs cannot be met without EFFORT, and the key is “sustained” rather than “acute” effort. Almost everyone “rises to the occasion” when a deadline is due. Such “acute” effort is often necessary in a literary career, but it won’t get a novel written. Sustained effort means doing the work every day; it means making continual progress toward a goal. Many novelists have a set page number or word count they strive to reach every day. That’s sustained effort. At times, when school overwhelms me, I’ve been reduced to, “just one paragraph a day.” But paragraphs lead to pages, and pages to stories. Push forward, and you’ll get there.

An individual’s effort level is affected by what psychologists call “locus of control.” People with an “internal” locus of control believe their own actions control the events of their lives. People with an “external” locus believe chance or “others” control their fates. Writers with an internal locus hold themselves responsible for their success or lack thereof, while authors with an external locus might say they were merely lucky or unlucky. Certainly, both internal and external factors impact a writer’s career. Research shows, however, that people with an internal locus typically work harder toward their goals. They believe effort is directly related to success or failure. From an “effort” standpoint, writers should try to feel in control of their careers, even if that isn’t always the case.

Extrinsic motivations also diminish intrinsic ones. Many writers write their first novel for love. They write their second for love and money. They write their third for money and love. See where the trend is headed? Love decreases; money increases. When it becomes all about money, many writers quit. To maintain long careers as writers, authors need to keep the love, even if that means changing genres or reinventing themselves.

Finally, we come to SKILL. When I started I had a good vocabulary, good visualization abilities, and had read enough to acquire a sense of story. That was it. I was a dialogue virgin, had no idea what a “scene” was, and used atrocious grammar. I could handle periods, but other than some haphazardly placed commas, I had only a nodding acquaintance with other punctuation. I hadn’t the faintest idea of submission format. These were skills I lacked. Yet, I sold a few stories (in the small press), all of which had vivid descriptions, interesting vocabulary terms, and periods. There were only two lines of dialogue in the first four stories I sold. There wasn’t a dash or semicolon anywhere. Fortunately, I knew what skills I lacked and found books to help me develop them. Unfortunately, they’re all still under construction.

Many of my students, and many writers, constantly play to their strengths. As a result, their strengths become crutches. We shouldn’t ignore our strengths, but improving weaknesses often brings the biggest advances in careers.

One weakness I’ve ignored is developing a business sense. I see others doing the same. I hate the business side of writing. I couldn’t sell slop to a hog. I’m not a good people person. I don’t smooze well. But I need to work on these issues if I really hope to expand my audience.

Now, it’s off to check my goals, increase my effort, and find some love in the story I’m working on. I might even read a book on selling. Anybody know a good one?

Thanks for having me!

—Charles Gramlich
Posted by Liane Spicer at 1:00:00 AM

Good post. This is one I missed. Charles Gramlich did good job and l feel like I've been to a mini-writers' conference after reading it. I'm going to enjoy Novel Spaces' year-long "hiatus" from new posts because I'll get to see ones I missed and revisit some I may have forgotten about. Thank you.

Charles has written many illuminating posts for Novel Spaces over the years. This one was a guest post he wrote for us before becoming a full member. His posts are some of the most popular on the site, in terms of number of comments and page views.

Good post. This is one I missed. Charles Gramlich did good job and l feel like I've been to a mini-writers' conference after reading it. I'm going to enjoy Novel Spaces' year-long "hiatus" from new posts because I'll get to see ones I missed and revisit some I may have forgotten about. Thank you.

Charles has written many illuminating posts for Novel Spaces over the years. This one was a guest post he wrote for us before becoming a full member. His posts are some of the most popular on the site, in terms of number of comments and page views.