Artificial (not so) Intelligence
I haven't written much in the last couple of days.  Why?  I've been watching a vacuum cleaner. Now this may sound strange to you. Well ... it is.


We bought a new robot vacuum.  It has a laser to scan the room, memory to keep track of what part it has cleaned already, and the ability to go back and plug itself in when its battery need charging.  Not only that, if it cannot clean the entire house on one charge of the battery, after it recharges its battery, it will go back and pick up where it left off and finish the job. You can schedule it to vacuum the floors every Tuesday, or twice a week, or every day if you are a clean freak, or room with Oscar of The Odd Couple..
How's that sound? 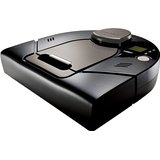 However, ...
How do we know if it really cleans every square foot?  Our floor is not that dirty. We thought about sprinkling sand all over and then we could tell what got cleaned and what got missed. A sure-fire test.  As it began, you could actually see the paths it made through the sand. On the practical side, we would have to stop it and empty its dirt bin pretty often.  And, what if it didn't do a good job?  We would have all this sand on the floor.  Cancel that method.
We have a house a little larger than average.  And it takes the little robot five hours to complete the job.  That means three trips out the gate with a full charge.
It's not quite as methodical or orderly as a person might be, although this model is not just a random go, bump, try a different direction approach.   So say the ads and directions.   At times, it looks like an organized random method.    So, I am drawn to watch it and see what it is doing. Is it more methodical or more random? Does it cover all areas.  (Remember, we decided not to put down the sand.)
At the end of its first battery life, it found its way back to the charge base, got there, turned around and snuggled its behind up to the charge contacts and settle down to be charged.  This took about two hours - the charge, not the snuggling bit.
Once charged, it took off again to try and finish the job. I had spent some time having lunch and answering a few e-mails and was just starting to write when I heard it power up, ready to clean.  I jumped up to see what it would do.
It had found its way back to where it had left off, and started to clean.  Shortly, it decided to clean under the bed. Now, I know we don't do that very often. Okay, never. But the little robot decided to do a good job and once it finished, it stopped and displayed a message: "Please clean my dirt bin."  Well, it did say please.
Once the bin was emptied and replaced, the bot was on its way again.  Except it didn't know where to go next.  It would turn in a complete circle, then stop and consider (or whatever bots do). Then survey the room again, stop and consider. After several of these, it decided to go left. That was okay, for the bathroom was to the left. It spent ten minutes in the bathroom, then came back to where it had done its contemplating before.  And did some more.
You can see why I didn't get any writing done. I tried talking to it on several (okay, many more than several) occasions.  The day was beginning to fade and so was I.  So, I paused it, and then instructed it to go back to its charging base.  It took off like a shot, perhaps tired of our dirty floors.
It zoomed into the next room and stopped. Again, it displayed that bewilderment it had shown before. Survey 360 degrees, think (or whatever), spin around, cogitate, turn around and consider its options.
In fact, the base was no more than fifteen feet away, in plain view, an easy selection with a laser. Possibly the problem was, not once did I hear it say, "I think I can. I think I can."  And it didn't.
So, if you're thinking about buying one, I'd suggest you ask to see its resume or test scores.   I'm going to reset everything and give it another chance tomorrow.
Writing suffers again tomorrow.