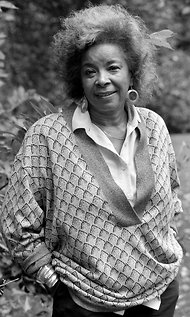 Two revered authors passed on this month: Ray Bradbury, whose tribute I wrote on June 7 in California, and Rosa Guy in Manhattan, New York.

Rosa Guy, without ever knowing it, was responsible for one of the great serendipities in my life. When I started the query process for my first novel I discovered a website that listed literary agents who accepted e-mail queries. My current agent, Susan Schulman, was one of those who responded immediately to the first batch of e-queries I sent. I later learned from Susan that my query had stood out initially because I'm from Trinidad, the birthplace of one of her favourite authors - Rosa Guy.

Ms. Guy, who hails not only from my homeland but also my home town, did not hang around Trinidad for long. She went to join her parents in New York at the age of seven, but her mother died shortly after. Within a few years her father also died, and her round of orphanages and foster homes began. Her young adult (YA) books draw heavily on her experience of coming of age in New York without parents, money or family stability.

In her obituary in the NY Times, she is described as "one of the 20th century's most distinguished writers for young adults". Ms. Guy pioneered the exploration of tough, realistic themes in YA fiction - themes such as race, class, poverty, death and sexuality. In one of her books a teenaged character embarks on a lesbian relationship with another girl, a subject which was taboo in children's literature at the time.

She is best known for her trilogy of YA novels, The Friends (1973), Ruby (1976) and Edith Jackson (1978). Her novels for adults include My Love My Love, Measure of Time, and Bird at my Window. She was one of the founders of the Harlem Writers Guild in 1950 and a key figure in the civil rights movement of the 50s and 60s. Her gifts to literature and to humanity are immeasurable.
Posted by Liane Spicer at 12:00:00 AM

Sadly, I've not read anything by her. I'm going to have to pick something up.

Charles, my agent recommended My Love My Love, one of Guy's novels for adults. I've read only her YA novels so I have to pick up the others myself.

Sadly, I've not read anything by her. I'm going to have to pick something up.

Charles, my agent recommended My Love My Love, one of Guy's novels for adults. I've read only her YA novels so I have to pick up the others myself.