We am not sane

In her comment on Dayton's last post, Liane said that, compared to writing original fiction, the world of media tie-in writing sounded unnaturally sane. I had never seen that adjective applied to the industry. The analogy I used when I wrote on the topic back in 2009 (Part One and Part Two) was that a writer of original fiction is a soloist while a writer of tie-in fiction is first chair in an orchestra. You still do your best, but you are always mindful of the fact you are a part of something larger; that your work must enhance the greater whole.

Having an established universe to draw on for inspiration is of course an advantage, but making sure what you write stays within the rules and continuity of that universe requires a type of discipline not asked of writers creating their own worlds. Sometimes there are inconsistencies in established universes – unsurprising in collaborative effort. Finding and building on those gaps, creating a solution to the apparent problem that fits the rules and continuity of the universe, is one of the most satisfying perks of the job. Particularly if you can incorportate real world events in your "patch."

Fans of the original Star Trek may recall that the first time Chekov appears on the bridge, supposedly for a routine shift change, he is grinning from ear to ear. (Note to purists: Yes, I know "Amok Time" aired before "Catspaw." "Catspaw" was filmed first.) Walter Koenig later explained that he was so delighted to be on the Star Trek set that he couldn't stop smiling the whole first day of shooting. In the second Star Trek movie, The Wrath of Kahn, Kahn recognizes Chekov even though the character had not been part of the on-air crew the season Kahn appeared. When asked about this during a fan Q&A at a convention, Koenig explained that Chekov and Khan had met in the men's room. My story "Indomitable," in Strange New Worlds VII, ties these two bits of trivia together. One of my most prized digital possessions is an email from Walter Koenig complimenting me on how well "Indomitable" captured his vision of Chekov.

Writing for games differs from writing for television or movies. With shows or series readers already have a solid narrative of the universe; the stories exist only to add nuance and texture to an epic already in place. Role players, however, are creating their own narratives using the tools and tropes the game's universe provides. Writing for games provides the readers with a context for their adventures, demonstrates how the forces and factions of the universe work and interact with each other, and provide an over-arching narrative continuity in which the gamers place their own stories. Sometimes this requires presenting game mechanics in ways that appear plausible in real-world contexts. BattleTech combines table-top miniature play with role playing, and bridging the two forms sometimes requires finesse. For example: A BattleMech is a ten-meter-tall walking tank with a mass equal to forty-seven Hummers welded together. In table-top play a BattleMech that has been knocked down can regain its feet in one turn; ten seconds in play time. A hundred-ton machine leaping to its feet like a B-movie ninja strains credulity, so for the benefit of role-players in fiction I describe the maneuver as a complex action requiring several minutes of precise effort. Some table-top purists decry such "distortions," but most understand verisimilitude requires compromise. More than once I've had to back down on my "patches." Another example from BattleTech: The controls of a 'Mech are described as two pivoting pistol grips on the arms of the pilot's chair. I've never driven a tank, though my father did, but I knew managing a giant walking tank should require a bit more effort. In fiction I depicted 'Mech jockeys switching levers and pulling on yokes. However this ran contrary to twenty-five years of tradition, including numerous illustrations of 'Mech cockpits showing the command chair with its two pistol grips and no yokes, wheels, or levers. I had to bring my stories in line with established continuity. (Of course there is a precedent for minimalist controls. A flying submarine is arguably more complex than a walking tank and had exactly the same setup in Voyage to the Bottom of the Sea.) 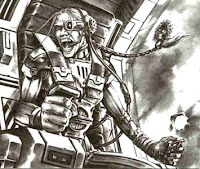 I've recounted in the past that my worst experience with an editor involved writing for a game. The editor wanted to add examples of gameplay mechanics and character type to the story and rather than ask for a rewrite, she removed a third of my story and wrote the new material herself. I learned of the change when layout sent me the pages to proof; I yanked my name from the story.

I was thinking about that episode yesterday while editing scenarios for a role-playing game. A scenario gives a gamemaster – GM – the tools for creating a role-playing adventure for the players. A scenario is a narrative that details opponents and secondary, non-player characters (NPCs) presents the players' objectives, describes the obstacles they will face, and provides a tree of consequences or results based on choices the players make at each step of the adventure. The GM uses the scenario to generate an adventure specific to the role players in her group. One scenario was brilliant in concept and complexity: three-dimensional NPCs, plausible internal conflicts within the team, clever and original problems mounting to a climactic confrontation, with utter disaster a real possibility at every decision point.
But.
While the writer clearly understood, and loved, the game, she did not understand storytelling. Groups of words that were not sentences. Groups of sentences that were not paragraphs. Events, descriptions, internal thoughts of the adventurers, and direct instructions to the GM jumbled together – evidently written in the order they'd occurred to the author with no thought to structure or order. I contacted the game's line developer about asking for a rewrite. I was told that the author was a brilliant gamer but "seriously challenged" when it came to prose. What I had was her best work. The line developer instructed me to rewrite as necessary. I did. Five thousand words in six hours.

And the whole time I was rewriting I remembered how angry I'd been at the editor who'd done the same thing to me, lo those many years ago. Media tie-in writing sane? I don't think so.
Posted by KeVin K. at 11:31:00 AM

Heh heh. Sane by comparison with spec, I meant. Fast turnaround, timely payments, and you also know in advance exactly how much you're going to earn for your efforts.

(Btw, didn't you mention a cheque that recently sauntered in three years after the project was done? I must be grasping at straws, wanting to believe that somewhere in the publishing industry insanity is not the norm.)

Yes, indeed. It was for a few small sidebars I'd written as part of a short-turnaround group rescue of another writer's major project. The product was published in March of 2009. However my payment was below whatever threshold the company's finance department had for writing cheques. The item & payment appeared on a December, 2011, cheque for a larger project I'd done. (Which they'd published in early 2011. This is still on the slow side of industry average, but not by much.)

We am not sane

Heh heh. Sane by comparison with spec, I meant. Fast turnaround, timely payments, and you also know in advance exactly how much you're going to earn for your efforts.

(Btw, didn't you mention a cheque that recently sauntered in three years after the project was done? I must be grasping at straws, wanting to believe that somewhere in the publishing industry insanity is not the norm.)

Yes, indeed. It was for a few small sidebars I'd written as part of a short-turnaround group rescue of another writer's major project. The product was published in March of 2009. However my payment was below whatever threshold the company's finance department had for writing cheques. The item & payment appeared on a December, 2011, cheque for a larger project I'd done. (Which they'd published in early 2011. This is still on the slow side of industry average, but not by much.)